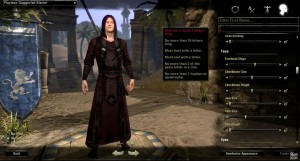 A leaked video of Elder Scrolls Online’s gameplay has been going around the past day or so. It was originally posted on Youtube but got taken down since due to a copyright claim by Bethesda, and nearly every other source has suffered the same fate. I did however managed to find it still online on RiotPixels. They also offer a .torrent version of the video so chances are if you’re interested you’ll be able to watch it.

Many things about the game are hush-hush at this point and all beta participants are required to adhere to the non-disclosure agreement so getting any kind of unofficial leaked gameplay videos such as this one is a real gem. The video contains 20 minutes of in-game recorded footage, starting from character creation which showcases us character customization options and class, faction and race selections.

The author chose a Sorcerer for this video, and there’s a few minutes of unedited gameplay included right from the start. He finds himself on a ship and quickly does what gamers in every MMORPG do: kill rats. The footage also shows basic NPC conversations, taking quests, interface options and customizations and various other settings, and of course combat (and as you’ll notice, dying).

Everything (well, some things at least) we so far heard and saw on trade shows and in interviews about ESO can now finally be viewed first hand, so be sure to watch the video on this link (no embed code provided, so you’ll have to visit the site).

In case the video gets taken down and if you can find an alternate source you’re welcome to post it in the comments below.