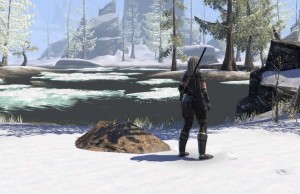 Lost Treasures are found in every zone in Elder Scrolls Online. These treasures can’t be seen unless you have a corresponding map in your inventory, and when you do they are displayed as a pile of dirt (dirt mound).

Treasures you can dig up are often not particularly valuable, but they are still a source of gold and items. Some of the equipment can have rare traits useful for research, and certain item sets may be valuable on guild stores.

In a way treasure maps are similar to survey maps you get from crafting writs: only you will be able to see and loot the treasure, and you need a map in your inventory in order to do so.

Unlike skyshards, treasure maps can be difficult to spot even when you know its location. In certain terrain these dirt mounds can be hard to notice so feel free to refer to our maps for more detailed coordinates and explanations on how to find them.

Listed below are all zones containing treasure maps. Simply click a zone name to view our maps with indicated locations and coordinates of treasures!

Tips: If you need an addon to display map coordinates in game, see Map Coordinates. Additionally, you can download the Lost Treasure addon which will simply put icons for treasure locations on your in-game map so you don’t need to reference our site.

Console users are stuck with our maps, but they’re easy to use so just click on links to your zone above and locations will be indicated.

Where to get treasure maps? 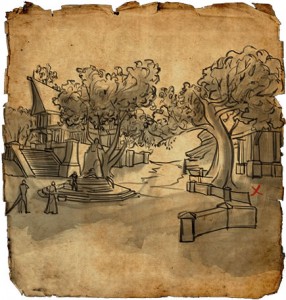 Other treasure maps are gained from monster drops or lootable objects, or alternatively you can purchase them from other players on guild stores or via direct trading.

I would not advise spending gold on lost treasures as they mostly don’t give you valuable rewards. You’ll be glad to know treasure maps are fairly inexpensive on guild stores in case you want to do them though.

How to dig a treasure?

To dig a treasure you need to have the corresponding map in your character’s inventory (bank stash will not work). You’ll need to find a specific location where the treasure is located, and each map only allows digging up one specific treasure.

Once you dig up your treasure, the map is consumed and will disappear from your inventory. Chests from treasure maps are only visible to you, and can’t be looted by other nearby players.

Once you have the map and found the location, you can simply interact with the “dirt mound”, after which a loot-able chest object will appear with your rewards.