Leveling and Character Progression in TESO

Elder Scrolls fans are already used to the open-ended progression system of their characters from Oblivion and Skyrim, and The Elder Scrolls Online didn’t change too much in that regard. TESO allows you to pick from a multitude of choices to build your character exactly how you want. The number of skill choices is vast and players can master a variety of skills and talents, and given enough time you can master nearly all skills.

This guide outlines the basic ways how your character development looks in Elder Scrolls Online, and how you can use various ways to customize your character to fit your play style. 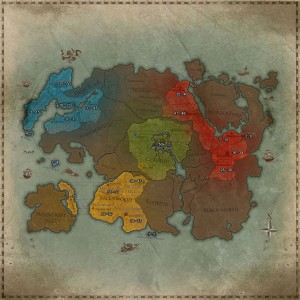 The basic progression in ESO is of course leveling: killing monsters, completing quests, exploring the gigantic land of Tamriel, or even lockpicking gives you experience points, which eventually lead to a level up for your character. A traditional and tested system that works well in other MMORPGs is present in TESO as well so I’m sure you’re already familiar with it. By leveling your character gains access to skill points and attribute points, and each level gives you one point in each of these. Skill points can also be obtained throughout the world by finding “sky shards“.

The first starter islands (Bleakrock Isle, Khenarthi’s Roost and Stros M’kai) are aimed for levels 1-5. Second zones are 3-15, followed by 15-25, fourth area 25-35, then 35-40 and finally fifth map for levels 40-45. Around level 45 or so players typically head to Coldharbour for level 50. Once you finish the storyline for your own faction, you’ll move on to another faction’s zones and start gaining Veteran Ranks (also called 50+ content).

Need a step by step leveling guide to take you to endgame in a week?

Attribute points are used to enhance your character’s basic resources: health, magicka and stamina. Each of these three has different benefits for your character and its build:

There’s nothing too complex in these three base character attributes and you will mostly put your attribute points into whatever is best for your class, play style and character build. There is a system called “overcharge” in effect where placing all of your points into one attribute would yield reduced effects (basically, diminishing returns) so it’s often not a bad idea to mix it up. Attribute point can be respecced even separately from skill points, but it does cost a not so insignificant amount of gold.

It’s interesting to note that investing an AP into health grants you +15, while 1 point only gives 10+ to stamina or magicka. While having extra magicka early on for leveling is very beneficial, in endgame you will likely want to focus most of your attribute points into health (despite overcharge), and get stamina and magicka from items, racial passives and especially armor enchantments since they give the same bonus amount to all of these three resources. 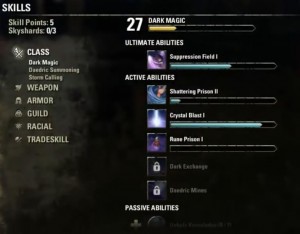 Skill points allow you to further develop your character by specializing into certain spells. Each skill point unlocks a particular spell or ability, all of which are categorized under certain themed skill lines, such as Class, Weapon, Armor or Tradeskill. By simply using abilities in a skill line you unlock further abilities in the same skill line, so it’s important to think ahead and not neglect using any abilities you picked.

Overall you gain a whooping amount of around 300 skill points on level 50, essentially enabling you to max multiple different skill trees. There are respecs available but they are very costly, depending on how many skill points you have allocated. 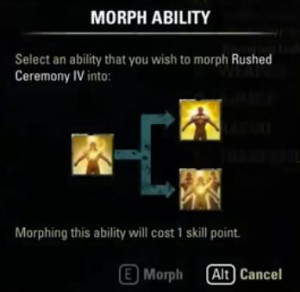 After using a particular spell for awhile (when it reaches rank 4) and gaining experience with it you can also choose to morph it, gaining further utility on them: as an example a Templar ability called Rushed Ceremony heals a nearby allied player, and when morphed it can either heal two additional allies or restore magicka when you cast it.

Choosing how to morph your ability can have a deeper impact as well, so for example if you’re a solo player you will probably want to use the latter morph on the aforementioned Rushed Ceremony spell, so you always need to take into account what you or your group might find more beneficial. You can only choose one morph, not both!

By using spells and gaining experience in the same skill line you eventually gain access to ultimate abilities. They don’t cost any magicka or stamina to cast, but you can’t use them very often as they are recharged during combat. However they are some of the most powerful spells in the game and can have a significant impact in combat.

While you can have multiple ultimate abilities to choose from, you can only place one on your skill bar at any given time. Successfully performing certain actions during combat (such as dodging or blocking) gives you finesse which awards you with more experience and loot, but perhaps more importantly also enable you to use ultimate abilities more often.

Another way to improve your existing skills and spells in by passive abilities. They have a lesser effect to your character but can be well worth it if you’re specialized into certain play style. For example you can spend a skill point on a passive ability that increases the damage of all your fire spells, or unlock an ability to passively regenerate health while in combat.

Various passive abilities are available in all skill lines, including class, racial, and others. Managing your skill points properly is very important and while TESO allows for a vast variety of character builds, lots of times it’s best to specialize into a certain game and play style. Fortunately the game allows you to build a character exactly as you like and doesn’t force you into any particular skill line. For the most part passive abilities only affect active spells in the same skill line, but some are globally active.

Picking a race and class also has an impact on how your character’s development works. Your race gives you a particular set of general passive skills, some of which can be more or less useful to certain builds. They are however fairly generic so don’t worry and simply pick whatever race you like to play!

Classes on the other hand have a bit more specific skill tree lines. Each class automatically has three skill lines unlocked which is the basic way to define your play style. Picking a class doesn’t define which skill line you have to pick, but you are limited by choices so pick a class wisely and make sure its playstyle suits you. I strongly suggest you take a look at our guides for classes which contain a list of skill lines and abilities, it should help you decide which class to pick!

Regardless of your class choice however you can also unlock new skills lines throughout the world by exploring or joining a guild. Joining a fighters or mages guild is fairly easy and the most simple way to unlock new skill lines. You can also choose to become either a vampire or a werewolf, giving your character a very specific skill set.

Veteran Ranks (VR) are a system of advancement available at level 50. Once your character reaches the level cap he automatically gains VR1. Each veteran rank has a better tier of gear associated with it, making this essentially a gear progression. Progression in veteran ranks is further achieved by questing in higher difficulty Veteran dungeons, PvP combat and even crafting. Currently the highest Veteran Rank you can achieve is 10.

Progressing through VRs enables you to of course use better equipment, but it also increases your “overcharge” (look above under Attribute points) caps slightly. VR 1-5 is often referred to as “50+”, and VR5-10 as “50++” content.

Some skill lines such as Weapon, Armor or Tradeskill are available to all characters regardless of race or class. Even if you strayed a bit with your class choice and for example went with a spell caster or mage build, you can still become proficient in melee weapons by simply equipping and using them.

Considering you gain around 300 skill points in total, in endgame it’s very likely you will be experimenting and using many different skill lines. For leveling it’s best to focus on fewer skill trees and learn and morph abilities for added effects. If you intend to do any serious crafting, investing a few points into crafting skill trees is often a must.

In closing, The Elder Scrolls Online enables you to build your character exactly as you want to. When picking a race and class it’s best to already have a specific play style in mind, but the game encourages experimenting and there are a ton of combinations of builds, skill trees, spells and abilities you can choose from and discover yourself.

To learn more about race, class and other choices you can make with your character check out Killerguides TESO Strategy Guide: it contains plenty of tips, tricks and premade builds to ensure you progress and level in the game in record time.