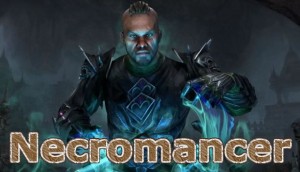 Necromancer is Elder Scrolls Online’s 6th class, introduced in Elsweyr update. Necromancer class is focused on damage dealing, and many abilities have both magicka and stamina morphs available to suit different playstyles.

The following Necromancer guide will give you a basic overview of abilities, morphs, but also some gameplay tips, combat tricks, and some builds to get you started.

Like all other classes, Necromancer also has three class skill trees. They are Gravelord, Bone Tyrant and Living Death. 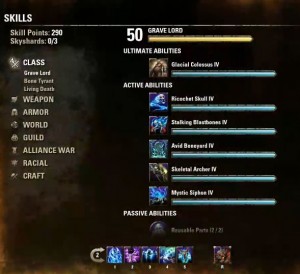 Grave Lord is Necromancer’s main damage-dealing skill line. Below is an overview of active and passive abilities.

Imbue the dead with frost, fire, and lightning to bring ruin upon your enemies. Raise relentless hordes of the undead and allow your fallen enemies to intensify your unyielding assault. 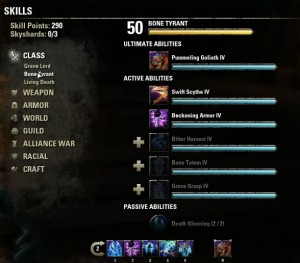 Bone Tyrant skill line is aimed at tank Necromancers. It includes a number of defensive buffs and self-healing spells.

Bend and break the dead to your will and use their remains to create impenetrable barriers and extend your own life. Control the battlefield with the bones of the departed. 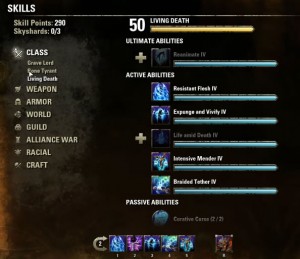 Necromancer’s Living Death skill line is aimed at healers. A great deal of skills here is focused on protecting yourself and allies from harm.

Draw from the power of life and death to replenish and restore your allies. Resurrect your defeated comrades or allies and keep them in the fight.

Magicka-based damage dealing build for Necromancer focuses on using a Destruction Staff. This type of build is most recommended for beginners looking to level quickly, or deal damage in dungeons.

Stamina builds for Necromancers are overall slightly less efficient for damage dealing, but they can work in almost any endgame content.

Bone Tyrant skill line has a decent number of defensive buffs and offensive debuffs aimed at tank Necromancers. Here’s a basic rundown of skills and items you should use for Necromancer tank builds.

Best race for Nercomancer depends on the type of build you play: stamina or magicka:

For magicka builds, my usual go-to race are Bretons. Their magicka cost reduction passives are irreplaceable. For tanking or stamina DPS builds I always prefer Redguards: their stamina restore on attacks are very beneficial.

Attribute allocation for Necromancer are fairly standard just like with other classes. I typically prefer about 20 points allocated in Health. Slightly higher health pool is always good to have in dungeons or trials.

Rest of the points should be allocated into either Stamina or Magicka, depending on whether you play a stamina or magicka based build. It’s either one or the other, as mixing both of these stats is not recommended.

Regardless of your choices, attributes are very cheap to change at any time, so don’t worry about trying various option to see what suits you. If you’re ever strapped for cash, take some time to go through this gold making guide which will easily help you make more than enough even if you’re a beginner player.

Much like attributes, your equipped items and item sets also depend on the type of build you play. Here are some of the item sets you can use, beginning with the ones which are easy to get, or cheap on guild stores.

Some of Necromancer’s abilities are Criminal Acts. Since Necromancy is illegal in Tamriel, if you use certain abilities next to NPCs, you will receive a bounty. This works similarly to thieving.

Performing necromancy acts such as raising the (un)dead is therefore not recommended while near NPCs. Abilities considered Criminal Acts include Skeletal Archer, Bone Goliath, Frozen Colossus, and Blastbones.

Why play a Necromancer?

The five other classes all have their strengths and weaknesses. Given ESO’s skill line system, all classes can be effective at different roles, and Necromancer is no exception.

For the most part, Nercomancer players are interested in their damage dealing potential. Necro’s class abilities don’t bring anything unique to the table, but they can be equally good as other classes with both stamina and magicka builds.

Necromancer healers are an unusual choice, but they have a good deal of helpful abilities which can keep your allies alive. Templars remain the easiest healing choice in the game, but any class can be effective in this role and Necromancers are no exception. The same is true for tanking.

Necromancy has a good amount of lore and history in The Elder Scrolls, and players finally have the opportunity to play around with the dark arts.