NPC guilds in The Elder Scrolls Online have been around long enough for most players to know the basics. Not to be confused with player guilds, NPC guilds in ESO include Fighters, Mages and Undaunted. Thieves Guild, Dark Brotherhood and Psijic Order were added after release in subsequent Chapters.

Fighters and Mages guilds include one ultimate ability each, and several active and passive abilities, all of which are morphable. The Undaunted include 5 active spells focused on group PvE. Your character can join any and all NPC guilds without restrictions. Below is a full list of spells in all guild skill lines! 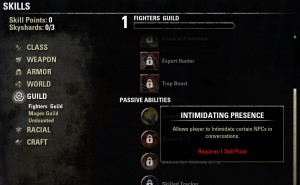 Fighters Guild is a PvE-focused NPC faction anyone can join in the first major town you come across in any zone. Vast majority of their spells give you bonuses when fighting against Daedric or Undead enemies, as well as Werewolves, thus making this skill line also quite useful in PvP combat. 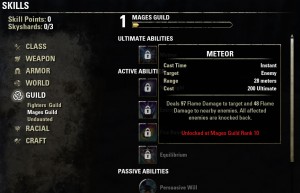 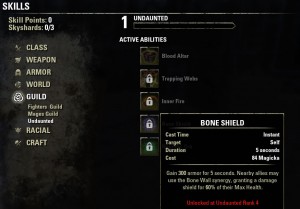 Undaunted is an NPC guild focused on exploration and discovery of dungeons throughout Tamriel. As such all of their abilities are excellent for group content, especially since they have synergy. For players who enjoy PvE dungeons I’m sure you’ll find very useful spells in the Undaunted skill tree.

Psijic Order is an ancient society of mages with time-focused spells. You can read more about Psijic Order skill line on our dedicated page.

To learn how to make the most out of various Guild skill lines be sure to check out this guide.