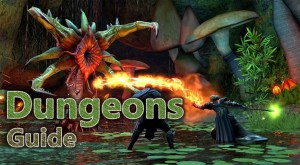 There’s a ton of exploration, questing and other activities you can do on your own in The Elder Scrolls Online, but the real fun for many players is group content. Grouping with other players can be fun, challenging and rewarding, and often necessary if you want to complete particular content. In this short guide we’ll cover the basics of group content and more specifically dungeons in TESO, so keep reading to find out more about player roles, combat tactics & mechanics and more.

Dungeons are instances areas designed for 4 players (full party). While they can be completed with less, having a max number of players in the party will make clearing a dungeon way easier just as you’d expect. The synergy between having different classes and roles is also important to have, and having typical party roles can make it a breeze. Unlike public instanced areas, you won’t meet other players inside dungeons except the ones in your group. 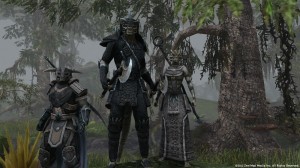 Having a tank, healer and DPS will immensely help in dungeons.

Having a tank, healer and DPS in your party can help a great deal! Despite ESO having such a flexible class/role system you should always try and cover all aspects of the combat and get as much team utility as you can. Don’t forget that with weapon swap (available at level 15) players can fill in multiple rolls during combat as required!

Below is an overview of three main player roles and how they can impact your dungeon experience.

Tanking monsters in The Elder Scrolls Online works a bit differently than in other MMORPGs. There are taunts which force monsters to attack you for a period of time, but it doesn’t always prevent every monster from reaching and attacking other party members. As such tanks are often more focused on crowd control, mitigating as much damage as possible while staying alive. Combat mechanics such as dodge, block and interrupt are especially important and should be performed constantly, which is why many tanks do their best to have a large enough Stamina pool.

ESO’s tanks weren’t designed to hold aggro on all monsters though so don’t expect your tanks to always do it, in fact they can usually hold aggro on one or two enemies at most. Monsters have their own AI and often go for damage dealers or healers in your party, but with the aforementioned combat mechanics everyone should be able to take care of themselves when attacked by 1 or 2 monsters. Since there’s a plethora of AoE healing abilities this isn’t a bad thing either, since the damage is spread but also healed on multiple players.

As a tank you should however always do your best to draw aggro from tougher monsters, and especially bosses. Bosses in dungeons do hit pretty hard and as a tank your increased defensive stats and large stamina pool you can use for blocking can definitely help you live longer than anyone else.

Be sure to also hold block constantly! You can at times throw in some autoattacks (time it between boss’ autoattacks), but generally you are taking far less damage while your shield is up so hold that right click! No healer will be able to keep your health up if you only block heavy attacks. Another mechanic you should not neglect is Bash: holding your right mouse button and performing a light attack with your left will interrupt any spell your enemy is currently casting. In dungeons it’s very important to try and interrupt as much as you can as it will disorient enemies for awhile during which they won’t be attacking anyone.

While a dedicated healer in a majority of groups is best to have, the flexible class system of ESO does allow everyone to fill in the role if and when necessary. Many class builds have ways to self-sustain in combat but in dungeons the damage numbers are higher and it may not be enough. Just having one healing ability on your hotbar but not enough magicka to cast it continuously can be very dangerous, but if almost everyone in your group can heal in the same way then you might be able to complete the content regardless.

Still, one player solely focused on healing will immensely increase the survivability of your group so you should always aim to have one, unless you are significantly over-geared. Besides topping off the health of your allies, as a healer you should also try to have one or two skills for crowd control to make sure you can, to a degree, ignore any enemies attacking you. Also interrupting enemy spells, blocking or dodging are all very useful tools to keep yourself alive without spending magicka on healing yourself.

Some general tips for healers would be to be proactive, meaning you should throw heal-over-time spells on your party even before they start taking damage. HoTs are the most magicka-efficient heals in the game and look to heal your party with them whenever possible. Your direct heals an shields are typically more costly and will drain your mana pool quickly.

You should also make use of weapon swap frequently. Some encounters aren’t very healing-intensive, so you can swap to a different ability bar with just 2 heals or so, and use other abilities for damage or team utility (such as Luminous Shards if you’re a Templar, or Mystic Orb from Undaunted skill line, …).

Outside of dodge and block DPS builds usually have limited ways to keep themselves alive when attacked, so once again be sure to use these mechanics to your advantage. Don’t always rely on your healers to keep you alive or your tanks to hold aggro – you will get attacked constantly, so don’t panic! That’s simply how dungeons and group PvE in ESO works so use all the tools in your arsenal and you should be fine. In many cases you should avoid using strong AoE spells since they can draw aggro of multiple enemies at once, putting huge strain on your healers to keep you alive.

You should also prioritize proper targets in fights. If the encounter requires it focus your damage on the boss, otherwise see if ranged DPS monsters are causing trouble for your group and try to get them down fast. Also make sure your healer isn’t being attacked for a prolonged period of time: while he may be able to survive long enough, it does put strain on his resources if he has to constantly waste magicka on self-healing. More than often it’s best to dispose of weaker monsters first and kill the boss last, but it depends on the specific encounter.

General rule of thumb for damage dealers in group dungeons is to not tunnel vision on just DPS. Nobody will care about your damage per second if the whole group is dead! If someone dies, it’s primarily YOUR job to resurrect them. Don’t forget to interrupt monster spell casting with bash if you’re close enough, and always keep in mind you can cast most spells WHILE blocking (right-click): you will be taking significantly less damage while holding block and you can still dish out damage.

Lastly, work on your awareness. You have the simplest job of all roles and not roll-dodging (double-tab direction keys) from attacks or spells is not forgivable. Don’t stand in the fire, and don’t expect your healer throw endless heals because of your laziness!

Dungeons are a vastly different experience from leveling your character alone or battling other players in Cyrodiil. For most early dungeons the spells you use for solo play should be a good start, but since other players can take advantage of synergies on your ultimate spells you should consider using those with added group utility.

Using synergy on other player’s spells can be immensely beneficial to your entire group, and a group that reacts with them quickly and properly will have a much easier time disposing of monsters and clearing the dungeon. When picking your ultimate skills be sure to consider what advantages they can bring to not only yourself but your group as well.

Damage dealers have the most choice when it comes to spells, so make sure you have at least some utility, damage mitigation, or crowd control spell available if needed. You can place it on your second ability bar, which by the way should in most cases have a Restoration Staff equipped with a couple of heals. If your healer dies, keeping your tank alive while the healer is being resurrected will help complete many dungeon runs. 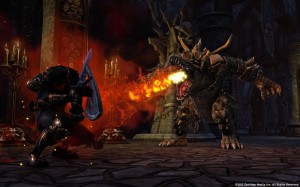 Joining dungeons as early as you can can help you understand monster aggro and other mechanics.

As previously mentioned aggro and threat works slightly differently in The Elder Scrolls Online than in other games from the same genre. Taunts are single-target spells and when fighting larger groups of monsters your tanks can’t be expected to hold aggro on all of them. That being said, here are some mechanics you should be aware of:

These are some general rules for dungeons, but in most cases your tactics need to adapt to the encounter, dungeon layout, number of monsters in your pack, and even your group composition.

The first three dungeons are designed for players level 12-15, but my recommendation is to find groups once you’re level 15 when you have access to weapon swap for additional utility. For Ebonheart Pact the first dungeon is Fungal Grotto in Stonefalls, for Aldmeri Dominion it’s Banished Cells in Auridon and for Daggerfall Covenant it’s Spindleclutch in Glenumbra. These are some of the easiest dungeons in TESO and you should be able to easily clear them with a decent party, so even if you’re not particularly interested in group content early on you should join at least once to get a better grasp of gameplay in groups as well as general monster mechanics. As a bonus, you’ll get a skyshard reward for every dungeon completed.

As a sidenote, you can’t explore the zones of enemy alliances until after you’ve completed your own faction’s storyline, but if you join the NPC guild Undaunted in the game you can complete all three of these dungeons earlier. You will find the Undaunted in the first town of each alliance’s area (same as with Mages and Fighters guilds). There’s a total of 16 dungeons in the game (launch), and there are also 6 Veteran dungeons for level 50 players which further extend the storylines of the first three dungeons.

You can check out Tamriel Foundry’s excellent video below for a basic look at the first three dungeons in the game, Banished Cells, Spindleclutch and Fungal Grotto. It’ll give you a basic rundown of bosses and tactics necessary to defeat them.

Vast majority of dungeons in TESO isn’t overly difficult as long as you have the basic player roles filled, and of course it helps when everyone does their job properly. You don’t have to spend time researching tactics or walkthroughs for dungeons you’re about to enter, but you should be aware that basic combat mechanics like dodge and block become even more important to use. Some attacks and spells in dungeons will hit you very hard and it’s best to simply avoid getting hit in the first place. Needless to say, don’t stand in the fire.

Overall dungeons are a very fun and at times a challenging experience, and the experience and loot you get from completing them are well worth the effort. So hit up the group finder tool, choose your role and start practicing playing in groups early!