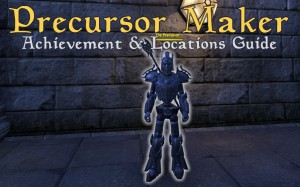 The Precursor is a target dummy available by completing tasks in Clockwork City. The tasks include doing a few quests and then collecting Precursor’s parts in several awfully named dwemer-themed delves and quest zones in the game.

Quest starts from a bulletin board in the north part of Brass Fortress in clockwork City. Quest is unsurprisingly called “The Precursor“. It requires you to go talk to an NPC named Associate Zanon.

Associate Zanon can be found in his workshop in Reactor District, a western part of Brass Fortress. Location is marked on the map below: 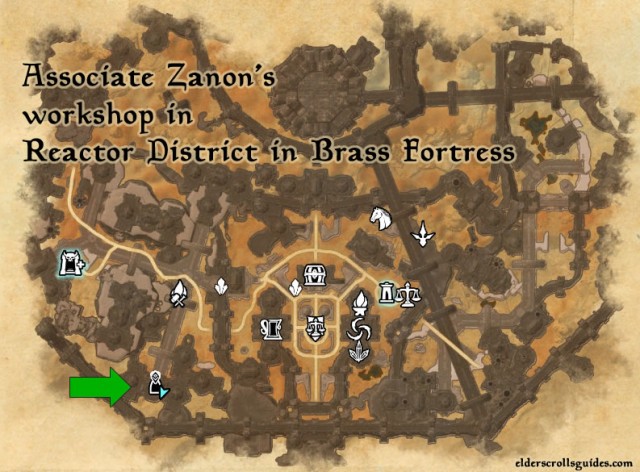 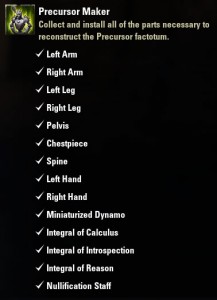 After a quick task to grab an Integral of Memory, you need to collect 14 different Precursor body parts. These are found in the following zones:

Once you have collected all 14 parts bring them to Associate Zanon to continue. After a quick mundane task you will be a proud owner of a brand new Precursor target dummy.

Maps below display the locations of Precursor Construct parts. Exact location is indicated by a cog wheel. Note that most parts are found in delves, but some are in regular quest areas.

Precursor Parts are fairly easy to spot once you find them because of the noticeable glow:

For your convenience delve maps below also include the locations of bosses and skyshards. 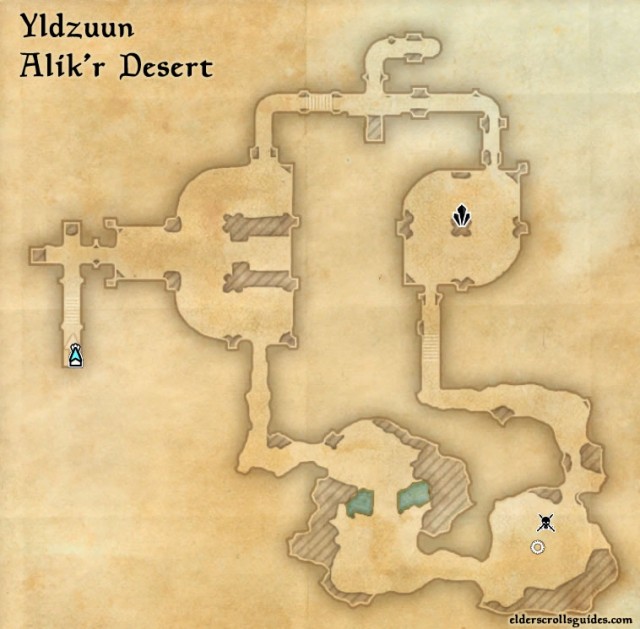 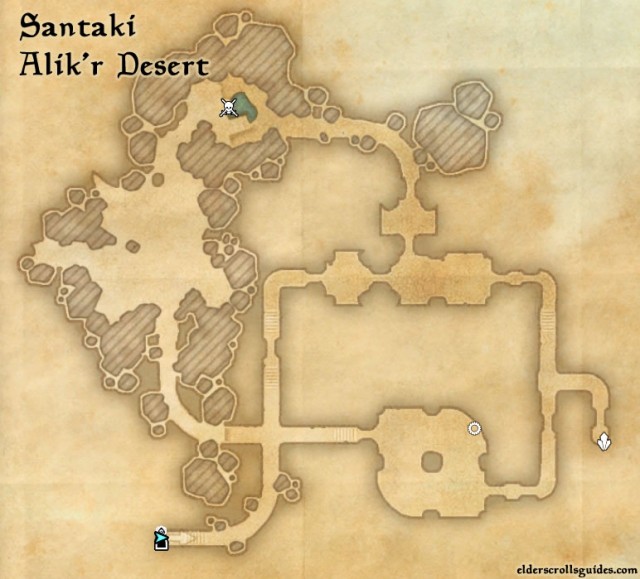 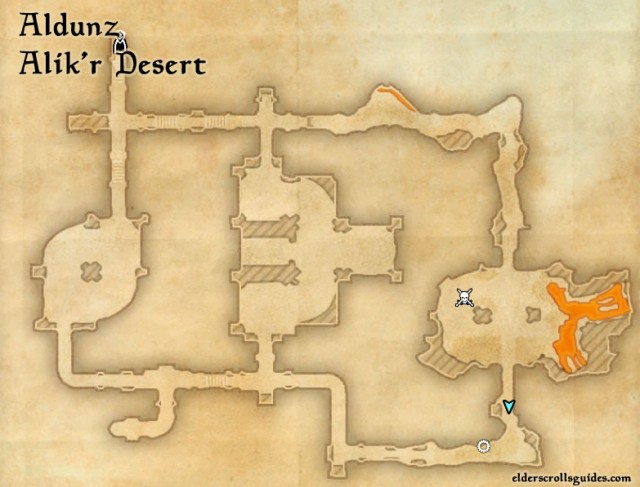 Aldunz is a delve located in southern Alik’r Desert, just east of Bergama town and wayshrine. 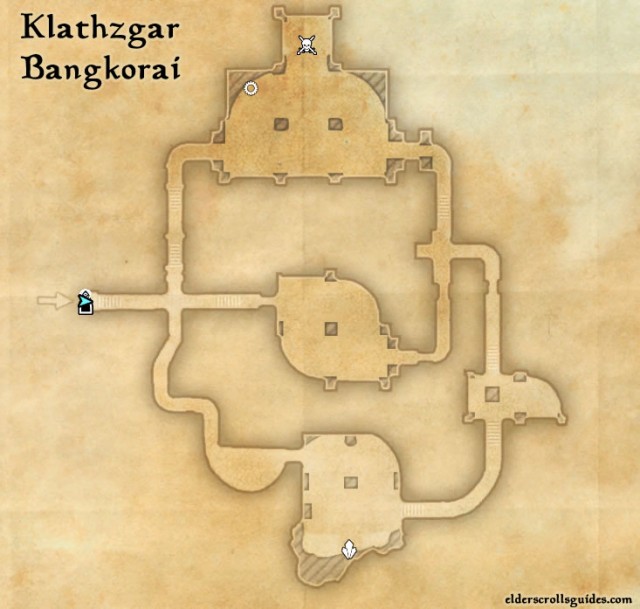 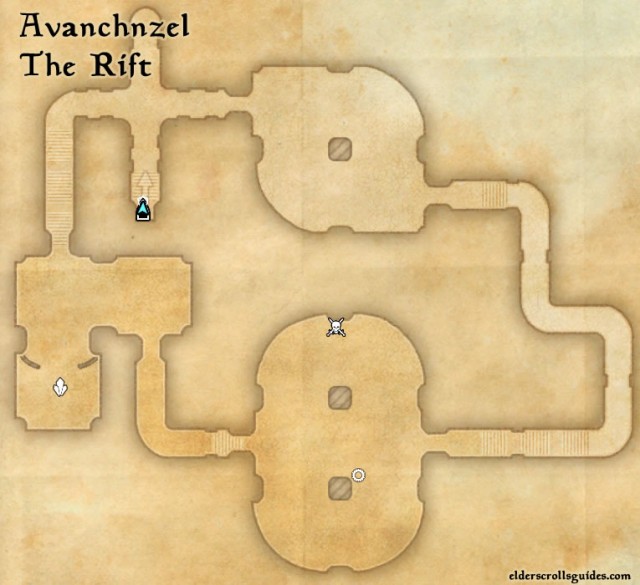 Avanchnzel delve is in mid-southern part of The Rift, south of Honrich Tower wayshrine. 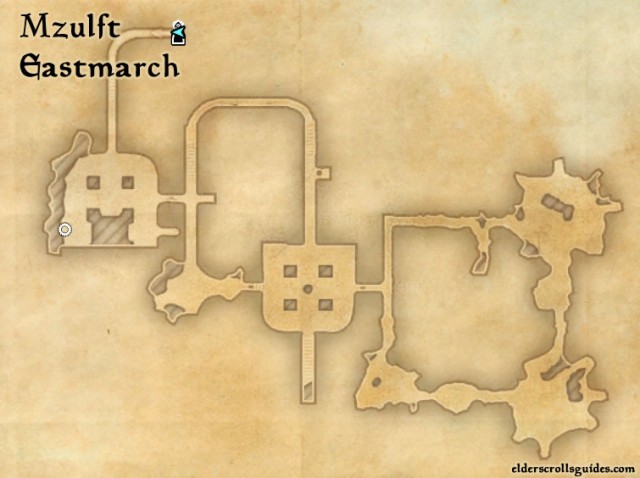 Mzulft is a quest area (not a delve) in central-east part of Eastmarch. It’s northeast of Logging Camp wayshrine. 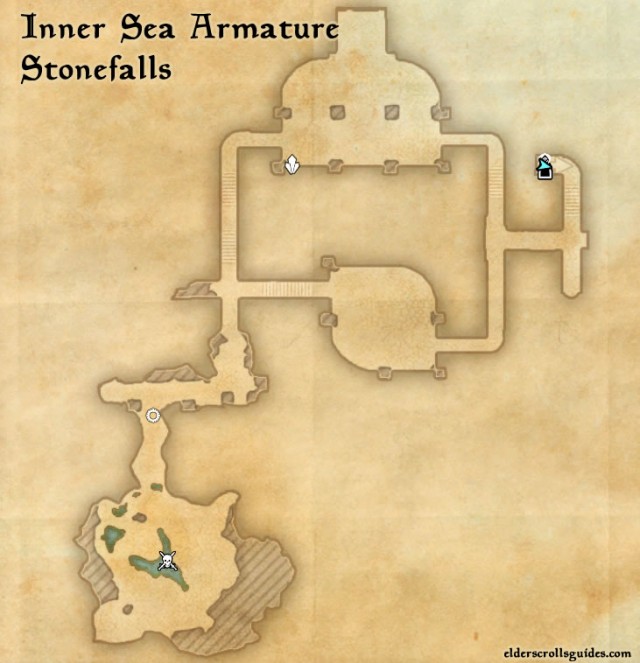 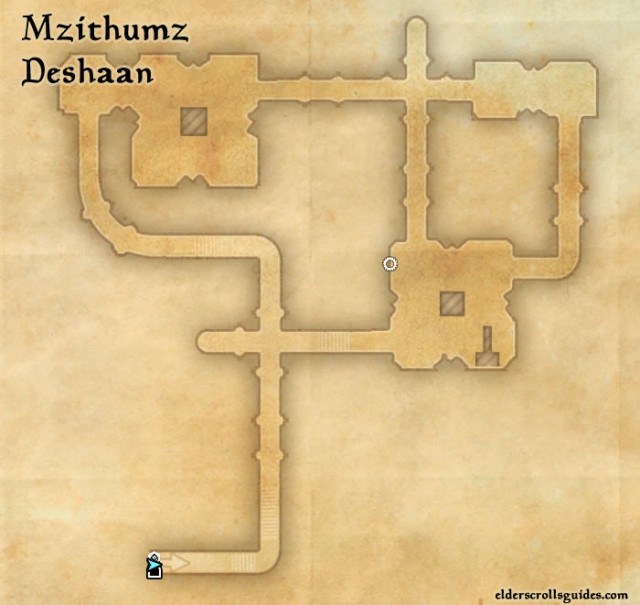 Mzithumz is a quest area (not delve) located in central-north Deshaan, just north of Mzithumz wayshrine. 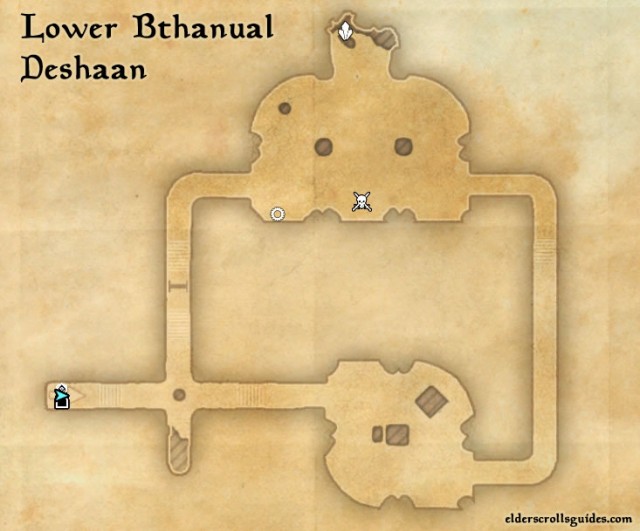 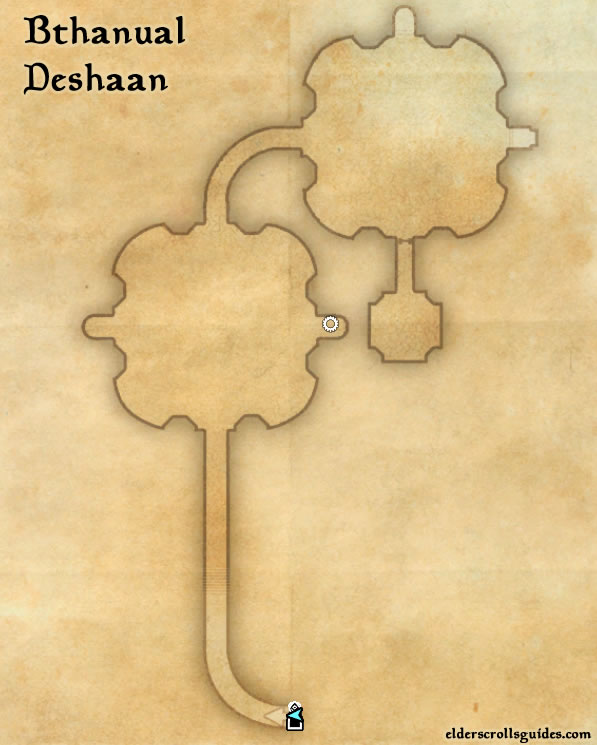 Bthanual is a quest zone in Deshann located between Mournhold and Muth Gnaar Hills wayshrine. 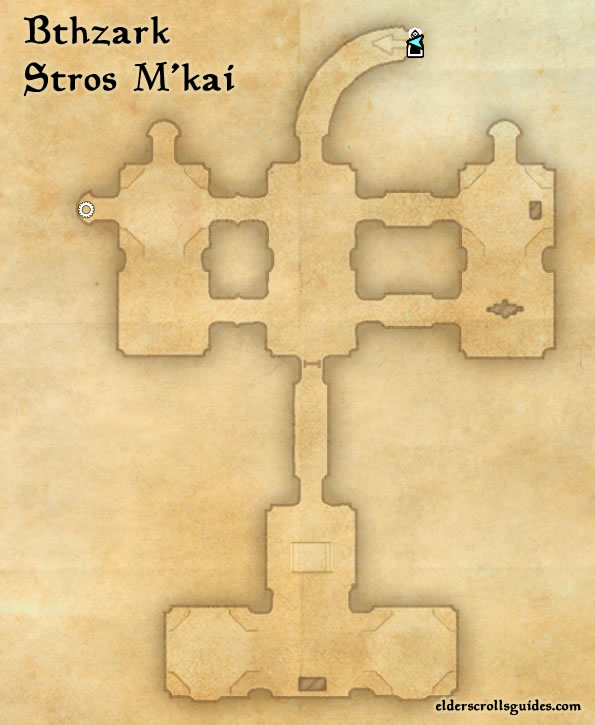 Bthzark is a quest area located in Stros M’kai, west of Port Hunding wayshrine. You will need to take “Buried Secrets” quest from Neramo just outside in order to access Bthzark. 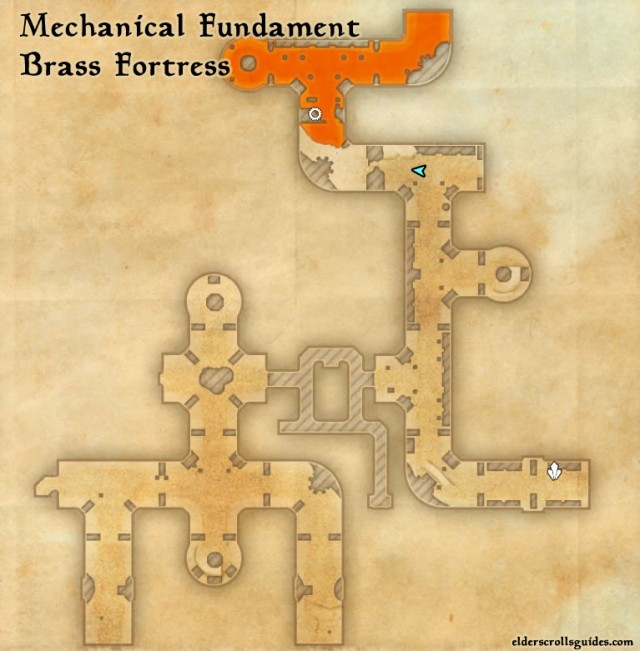 Integral of Calculus Precursor part is found in the lower level of the Fundament, however it’s easiest to reach it by jumping straight to it from the upper level. 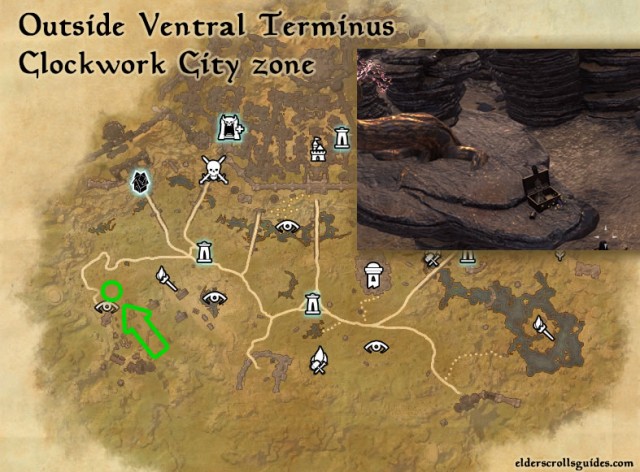 Integral of Introspection part is located in western Clockwork City, just north of Ventral Terminus quest area. Part is outside sitting on a ledge as shown in screenshot. 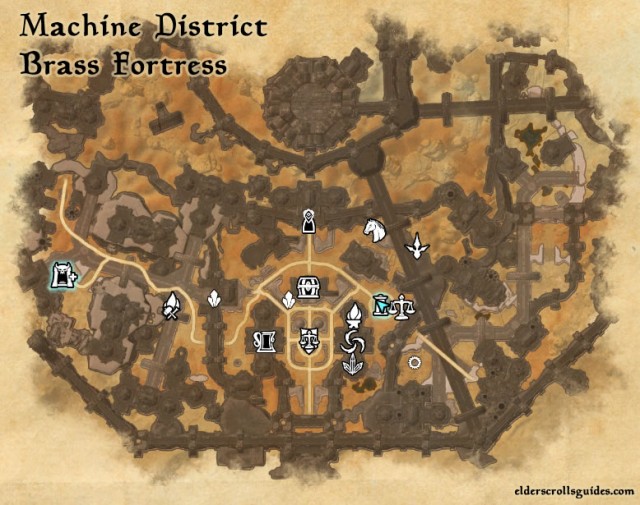 These quests are “To the Clockwork City“, followed by “In Search of a Sponsor”, “The Strangeness of Seht”, “Deepening Shadows”, and “Lost in the Gloam”. This quest line is part of the zone’s main storyline so it’s worth completing.

Get your Precursor target dummy

After you have collected all Precursor parts, talk to Associate Zanon in his workshop to continue. After a quick quest you will obtain “The Precursor“, a bind on pickup furnishing item faithfully serving you as a target dummy. 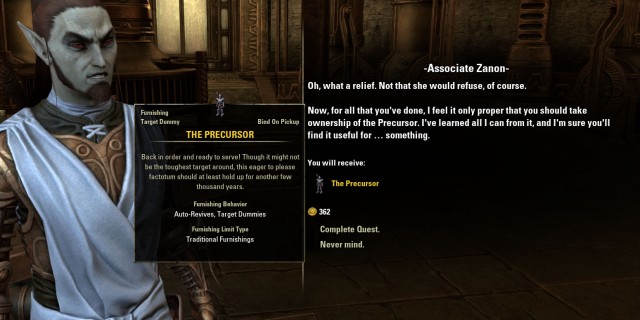 It’s worth noting you can do these quests on multiple characters, and thus receive multiple Precursor target dummies. Grouping them up in player homes is a good and inexpensive way to test AoE damage on a robot army. Keep in mind these Precursor dummies are bound and can not be traded with other players.

Published 339 days ago This entry was posted in Guides and tagged housing, quests. Bookmark the permalink.