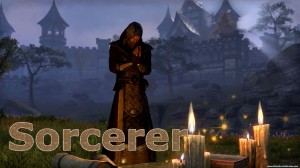 Sorcerer class is a powerful caster in The Elder Scrolls Online who mainly uses magical skills and spells to destroy or weaken enemies. Anyone who likes casting spells and other magical powers and overall prefers the “mage” play style will definitely fall in love with Sorcerers. If you want to control the forces of nature, conjure dark minions to do your bidding, and dominate in PvE or PvP combat be sure to take a closer look at this exciting class!

Same as with the other ESO classes, Sorcerers have access to three class specific skill lines, each of which offers a unique set of spells. The three skill sets are Dark Magic, Daedric Summoning and Storm Calling, each of which has its own strengths and weaknesses.

If you want to create a perfect Sorcerer class build be sure to take a closer look at the spells in each skill line below!

Learn about the most powerful Sorcerer class builds from top raiders and PvPers. Top DPS, tanking, and healing builds all in one place, along with hundreds of useful tips about raiding, dungeons, delves, leveling, PvP, weapons, spell rotations, and more… 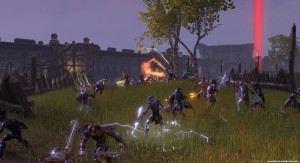 Dark Magic skill line is primarily focused on control, knock back and damage dealing. Various debuffs and crowd control (CC) in Dark Magic will help keep enemies at a distance, all the while destroying their health pools. Take a look at the full list of spells below. 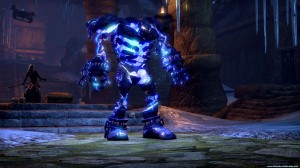 Spells in this tree allow you to summon helpful creatures and minions, curse your enemies and use protective spells. The downside to Daedric Summoning is that you basically sacrifice your own damage and defense to make your minions more powerful. They can however do a lot of damage themselves which is why this skill line is also good for leveling.

Note that you can have a summoned minion and a Storm Atronach at any given time. 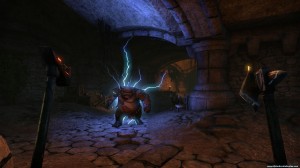 Storm Calling is the basic offensive tree for Sorcerers and Sorceress, primarily consisting of lightning spells good for both PvE and PvP combat. A full list of all available spells in Storm Calling tree is below, which should help give you further insight when planning your Sorcerer build.

Optimized Sorcerer builds for leveling, dungeons, trials, and PvP, plus hundreds of other tips, tricks, leveling strategies, and more.

Sorcerers predominantly use Destruction Staves, something that shouldn’t come as a surprise to anyone. There are however various Sorcerer builds, some of which include a bow or even a two handed mace (though typically on weapon swap). Unless you have a very specific build in mind such as some sort of a battle mage, it might be best to simply stick with staves until you’re more experienced with the game and able to come up with your own amazing builds (at which point, don’t forget to share them in the comments below!).

While the “Battle Mage” build gets thrown around in the community quite often, truth be told it’s just not optimal to deviate too much from “standard” class roles. Sure you can make it work and it will be fun for awhile, but once you swap to Destruction Staff (and especially once you start using Impulse ability) you will likely never go back. It’s just way more optimal in terms of damage and it will make leveling much easier and faster.

If you prefer experimenting with bow or melee builds, a 5+2 combination of medium and light armor is the best way to go about it. Despite Sorcerers wishing for it, unfortunately they don’t make particularly good tanks so it’s unlikely you will ever find yourself wearing heavy armor.

To find optimized Sorcerer builds for leveling, PvP or dungeons we recommend finding them in this more detailed guide, along with tons of other tips, tricks and strategies for Sorcerer players!

Sorcerers spend a majority of their attribute points into increasing their magicka, allowing for a larger magicka pool to spend for casting a multitude of spells and abilities. Magicka is very important for Sorcerers who spec into Daedric Summoning, as summoning minions decreases your maximum amount of magicka. A small amount of stamina is also very helpful, especially for Dark Magic Sorcerers, as the Dark Exchange ability can convert your stamina pool into health and magicka.

Furthermore, having a larger health pool is beneficial as well as it provides more durability to your character, and also synergizes well with Blood Magic passive spell in Dark Magic, which restores a percentage of your maximum health every time you hit an enemy with a Dark Magic spell.

For the most part Sorcerers spend attribute points into magicka, and some points into health can be very helpful as well. Certain builds and skill lines can benefit from a large health pool, and even stamina can be put to good use with some spells. Both Destruction Staff and class skill lines damage increase by having a larger magicka pool, making it a no-brainer choice. If you’re in doubt just dump 40 or even all 50 attribute points into magicka, and then get other stats via enchantments and food.

Dark Elves, Bretons and High Elves are amongst the most popular of Sorcerers. They are skillful casters and the most suitable Sorcerers due to numerious magicka and spell damage bonuses, but by no means are you required to pick any of those races. Picking a race doesn’t in any way limit your choice of skill trees or funnel you into a particular play style, so simply pick a race which you think looks the best.

Why play a Sorcerer?

The most powerful mages in Elder Scrolls Online are without a doubt Sorcerers. While other classes have access to magical spells (mainly Templars), Sorcerers are the kings of magic with extremely potent and destructive forces and debilitating curses and crowd control. If the path of a mage is your preferred play style then you certainly won’t regret picking a Sorcerer class.

To learn more about the Sorcerer class in Elder Scrolls including more detailed ability descriptions, skill builds, leveling guide, gameplay information, combat tactics and other must-know information be sure to take a look at this comprehensive guide. It’s well worth the read and will help you gain further insight into how to make your Sorcerer most effective!