Cyrodiil is an enormous area in Tamriel, and for a lot of players the most fun part of Elder Scrolls Online. It’s a PvP area with a ton of different keeps and siege warfare, as well as some PvE content (quests). It also contains 45 skyshards, giving you more than plenty of reasons to visit. This guide will provide a basic overview of campaigns, keeps, siege weapons and other stuff you can find in Cyrodiil.

Everyone can become an Emperor!

Becoming an Emperor is a dream of every PvP player in Elder Scrolls Online. What others farm for months, you can have in just 1 week!

Learn the best PvP tactics, find out how to dominate other factions, and get your Emperor skill line with great abilities and passives!

Best of all, you won’t need a dedicated guild behind your back to carry you, and you’ll even earn some gold while doing it! Interested? 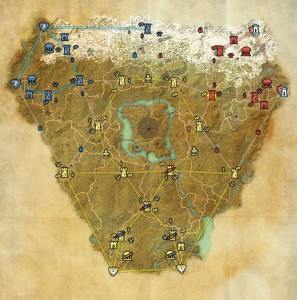 You can join Cyrodiil once your character reaches level 10; base attributes will be adjusted to the same values for all players unless you’re level 50, making it possible to compete even against higher level players. By participating in alliance warfare you gain gold, experience, gear, and Alliance Points. If you want your shot at the exclusive Emperor skill line, this is the only way to get it!

All new recruits fresh to the Cyrodiil warfront are provided with detailed instructions about how to participate in the war effort, courtesy of their alliance. You can speak with the following NPCs to initiate the Alliance War tutorials which will quickly walk you through the important basics of Cyrodiil and the Alliance War: 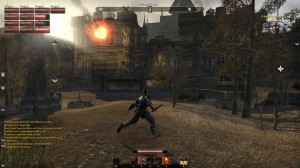 In Cyrodiil, each alliance has six keeps which are natively theirs.

Ownership of keeps will grant bonuses to your alliance outside and inside of Cyrodiil, but will also open up many other important aspects of the war for your alliance.

Keeps are linked together in a transit network. To teleport from one keep to another, interact with the “transitus shrine” which opens the transit map.

All keeps have three resources that fuel the upgrades to a keep over time, as long as the keep and resource are owned by the same alliance.

Resources also upgrade over time to have tougher guards at them, or an increased rate of resource flow to the nearby keep. 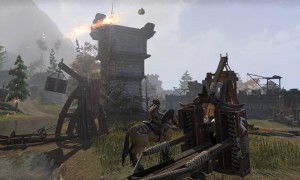 Siege weapons are available at all keeps from a Quartermaster NPC, or at your entry location into Cyrodiil.

There are several types of siege weapons you can use in Cyrodiil to help capture keeps or damage multiple players at once. Trebuchet and Ballistae are long range weapons, and Catapults are used for short range. All siege engines deal AoE damage! 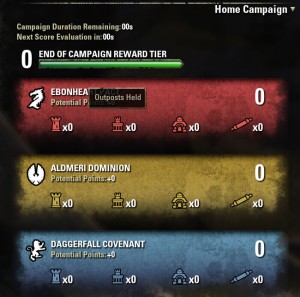 Cyrodiil is packaged in a campaign system to bring a bit of order into the chaos of the Alliance War.

Emperorship is gated by owning the six major keeps around Imperial City. If a single alliance owns all of these keeps at once, the player on top of the leaderboard for their alliance will be automatically crowned Emperor. 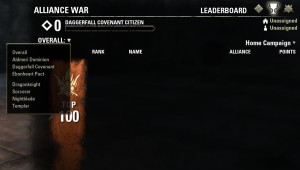 Leaderboards are available to track how well members of an alliance are doing within the campaign. The leaderboards are accessible by clicking the trophy symbol in the Alliance War UI.

Alliance Points are the experience points you earn by participating in the Alliance War. You can earn AP by killing players and capturing various points in the zone; killing players gives more AP though to make sure the focus is on combat.

There are two Alliance War skill lines that you can learn: Assault and Support. Alliance skill abilities affect large areas and are much more expensive than normal abilities. 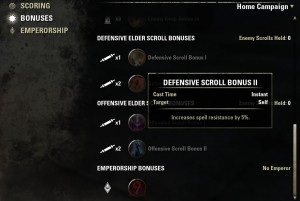 Elder Scrolls are objectives that provide bonuses to all members of the alliance that controls them. They are stored in scroll temples near the border gates in Cyrodiil. Once a faction takes control of them though they can keep them in any keep in their control.

Elder Scrolls are basically one additional objective for factions to get and are highly contested. Since they affect everyone in your alliance they can help turn the battles in your favor.

The various towns and caves of Cyrodiil beckon all players to explore and enjoy all aspects of the land.

We hope this beginner’s guide to Cyrodiil will help you get a quicker grasp of the basics. Large scale player versus player combat is one of the best features of this game and you definitely shouldn’t miss out on it, so get to Cyrodiil and put your class build to the test against other players!

Published 3259 days ago This entry was posted in Guides and tagged alliance points, alliance war, cyrodiil, PvP. Bookmark the permalink.

8 Responses to Beginners Guide to Cyrodiil