Traits are special item properties players can add to their items during the crafting process. They can be applied to weapons, armor and jewelry and can only be added when the item is made, not afterwards. Before being able to add a trait to an item you first have to research it, and with each research on the same item slot the time required to learn another trait is increased.

Since traits are often a bit confusing to new players and frequently mistaken for enchants, we’ll take a closer look at them in this guide and hopefully clarify a few things for you. 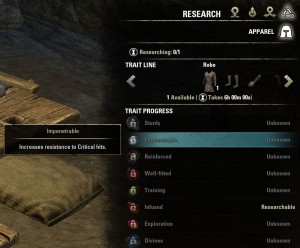 Trait is a special property added to a crafted item which improves the item’s damage, defenses, or other effects. Traits exist on weapons, armor, and jewelry.

The kinds of traits you can get are different, depending on what kind of item it’s on. For instance, there is a set of traits specific to armor, and a different set which applies to weapons. Some traits might seem the same between item types, but for crafting they will require gemstones which are unique for that item’s version of the trait.

Traits are calculated by a percentage value, such as “increases experience gained from kills by 5%”. This can be increased by improving quality of the item. For example, here is how Training trait increases when on a bow of different rarity/quality:

Traits are not the same thing as an Enchant. You can have both Traits and Enchants on an item. Naturally, Enchantments are put on the item after it’s already been crafted.

See our Jewelry Crafting Guide for more information about ring and necklace crafting.

Ornate and Intricate are two other traits found on items. Neither of these can be crafted or researched, and only items obtained through quests or monster drops have them.

Crafters who use traits when crafting items include:

Technically herbs used for alchemy also have traits, but they don’t have to be researched in the same way for you to be able to mix potions. 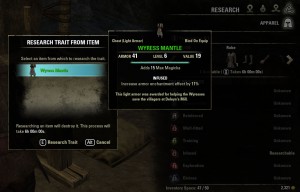 You must research an item in order to unlock a trait for that item. For example, if you want to craft a chest with Infused trait on it, you must first find a chest item which already has the Infused trait, and then use the “Research” option at the appropriate crafting table.

Research has a cooldown timer. Research time increases for each trait you previously researched on a particular item. The first time you research an item it takes 6 hours before it completes the trait unlock. The time for each subsequent trait research on the same item doubles:

At first you can only research one item at a time for your craft. This means if you craft bows, staves, and shields with Woodworking and you research a bow trait, you will not be able to research a staff and a shield at the same time.

Each profession’s passive skill tree includes passives in which you can spend skill points. These passives decrease research times and increase number of items you can research:

These skills have 4 ranks available, and they seem to be the same for the first three smith crafts:

Jewelry Crafting’s Lapidary Research only reduces research time. It does not enable you to research multiple traits at the same time.

Researching all traits for just one item without any research time decreases takes 18 weeks. With 4 skill points and 25% reduction you can decrease total time to 11 weeks. Researching all traits on all craftable items in Clothing or Weaponsmithing takes 1827 days, or 385 days with 25% bonus from passives.

Having an ESO+ subscription also reduces all research times by 10%. You can also purchase Research Scrolls in the Crown Store (no cooldown), or from Rolis Hlaalu vendor (20 hour cooldown on use).

Either way, researching all traits on all items takes nearly one year (real time) even with reduced times via passives and subscription. Researching is clearly a huge time sink, so be sure to start early. If it’s any consolation, research continues while you are offline.

Getting items with traits 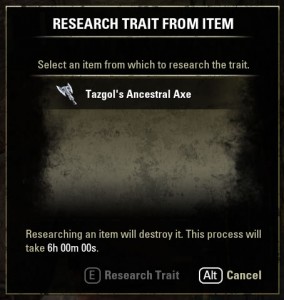 Items dropped in the world can sometimes have a trait already attached to it. You can also purchase them from other players, or receive items with rare traits as quest rewards (keep an eye out for those!).

Adding traits to crafted items might be considered either Intermediate or Advanced level crafting, not because it is difficult, but because it takes a commitment of time into researching traits.

Another aspect of advanced crafting is the special set-bonus crafting benches. Traits affect your ability to craft the set-bonus gear. Each set requires learning 2 or more traits before being able to craft the bonus.

For instance if you want to make a Death’s Wind set axe, you must have 2 traits unlocked on axes before you can craft it. The number of traits required to craft set-bonus gear goes up as you get to higher leveled set-bonus benches. For example the Magnus’ Gift set-bonus requires that you have 4 traits unlocked. You can add a trait to a crafted set-bonus item when you craft it.

Items can have both traits and set bonuses applied.

What are trait gems

There is a gem unique to each type of trait, and you can look them up above under Armor, Weapon or Jewelry trait tables.

How to get trait gems 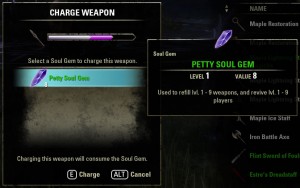 Gem used for traits are a commonly found item in loot containers such as barrels, crates, trunks, bookshelves, nightstands, etc. You also have a chance to get a trait gemstone when you refine raw materials.

Your chances of getting a trait gem are higher based on item quality. Percent chance to gain a trait gem from refinement of raw materials is approximately 10%.

All weapon and armor trait gems are very common, but Nirncrux can only be gained by looting raw resources in Craglorn. Most Jewelcrafting trait gems only come from specific sources.

Though by no means a rule, below is a list of armor traits which are in my opinion most useful to research, in that order:

Different classes, builds and play styles may have different priorities. For example, Well-Fitted would for example be better for Archers and Rogues (you’ll want to always keep a decent portion of your stamina pool available for attacks). Training traits can be very useful to have when leveling, but I would personally never prioritize it for research.

You also need to consider other classes’ preferences, since you will inevitably want to craft and sell armor to other players — there’s definitely a much smaller market for Training or Well-Fitted traits.

Most used weapon enchants are Sharpened, Precise, Defending, Decisive, Infused, Nirnhoned, Powered, Charged. You can research them in that order.

Which traits to use?

If you’re in doubt as to which traits to use on which items, the table below is your best bet:

For weapon traits, in most PvE cases you’ll want to go for Sharpened or Precise (increased penetration or critical chance) as a damage-dealer or healer, while tanks typically go for Defending. Damage differences are not huge between Infused, Precise, Sharpened, Nirnhoned and Weighted.

Adding traits to items is an important part of the crafting process. Researching all traits for all items in just one profession takes an enormous amount of time, but being able to add multiple different traits to items is what separates dedicated crafters from the rest.

For a more detailed overview of crafting in Elder Scrolls Online be sure to read our crafting guide. It also contains links to guides for specific professions which go into even more detail.

Published 3231 days ago This entry was posted in Game Info, Guides and tagged blacksmiting, clothier, traits, woodworking. Bookmark the permalink.

5 Responses to Newbies Guide to Traits