Most of the abilities in Alliance War skill line are of course aimed at PvP-focused players. Alliance War includes three different skill lines which are Assault, Support and Emperor. Emperor passives are incredibly powerful, but at the same time extremely difficult to obtain. As a side note, experience in this skill tree is gained by increasing your Alliance ranks. You can view all Alliance War skill trees and abilities below!

Assault skill tree is focused on increasing your damage and mobility in Cyrodiil, and make your friends stronger as well. Assault is great for players on the frontlines, particularly tanks and melee DPS. Below is a list of spells you can find in Assault skill line. 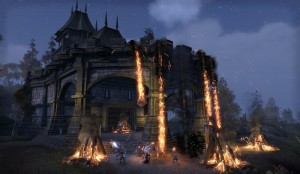 Support skill tree is aimed for players who prefer to take more of a utility role in Alliance versus Alliance combat. Shields, regeneration effects and debuff removals are the staple of this skill tree, so take a closer look at all the abilities below!

Emperor status is only awarded to the best of players in PvP. One player is crowned as Emperor once every 3 months, making this exclusive skill tree extremely difficult to obtain. The passive bonuses it offers however are absolutely amazing and well worth the effort!

The first thing you should do on your road to Emperor status it to read this guide. It will show you more detailed PvP/AvA information and tell you which character builds work best in Cyrodiil!