Summerset has its share of annoying quests, and Pilgrimage’s End is one of the most hated ones. This daily quest is given by Justiciar Tanorian in city of Alinor on Summerset.

Quest requires you to travel to King’s Haven Pass delve and find 5 bodies of dead Pilgrims. Upon entering King’s Haven Pass (from the west entrance) you will find yourself in the main outdoor area where you can find two pilgrim bodies (marked with blue on map).

First pilgrim is straight from the west entrance on a small ledge. Once you find him continue via the southern path displayed on map and climb up the ramp. Second pilgrim is on a small ledge, and once you locate him simply jump down from the cliff/ledge and you will find yourself right in front of the entrance to caverns.

Both blue pilgrims are located on cliffs so in the interest of saving time it’s wise to dismount and be careful not to fall off.

To get to the other 3 bodies you will need to go through the underground caves part of the this delve. Broken bridge in main area blocks you from traveling to boss directly. These last three pilgrim locations are marked with red circles on the map. 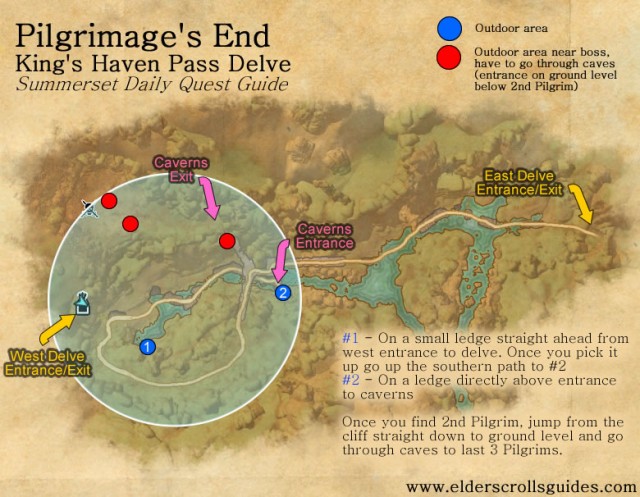 Cave entrance is located on the ground straight below the 2nd blue pilgrim. There are no pilgrims in the caves. Exiting the caverns is fairly straightforwards, and once you do the 3rd pilgrim is straight ahead. Last two are near the boss. You will aggro the boss for the last Pilgrim.

Published 646 days ago This entry was posted in Guides and tagged daily quests, maps, quests. Bookmark the permalink.