What are Tel Var stones?

Tel Var Stones are a new type of currency introduced with the Imperial City. They can be exchanged for equipment or crafting resources at special trading posts.

It’s a very common question asked around the community, so I hope this short guide will help explain what are Tel Var Stones and how to gain them.

How to get Tel Var Stones

You can get Tel Var Stones by either killing players or monsters within IC, or by looting special treasure chests.

Killing players is fairly straightforward. If you kill a player of the opposing faction you will gain all unspent Tel Var Stones he accumulated on his character. In case the player carries no stones at the moment, you won’t receive any.

How many stones you receive mainly depends on the strength of the monster. For example say a monster gives 400 Tel Var Stones (maximum for bosses) when you kill him. That reward is split with all players who participated in the fight equally, so if you bring 3 other players with you each of you will get 100 Tel Var Stones as a reward.

If you bring 10 players, each will get 40 stones. The rewards are evenly split, so while it may be much safer to run in large groups, small groups can profit greatly as well.

Normal monsters usually carry about 4 TVS, but you can also find special but rare Cunning Scamp monsters, slippery little creatures that run around Imperial Sewers. They will try to escape you, but can often run and bait you into dangerous areas so be careful about pursuing them. Scamps carry a “generous” amount of stones so they’re worth killing in most circumstances.

Imperial City also has treasure chests spread throughout the area, which will reward a substantial amount of Tel Var stones when looted. This chest’s contents are not shared and only one player can loot it, but be sure to play fair and defend your friends while they’re busy looting chests in a PvP zone.

As you can see in the screenshot of the Tel Var Stones counter above, alongside displaying your current count of stones you can also view your “multiplier”, displayed as “x2″.

Essentially the more stones you have collected, the bigger the multiplier:

Important thing to remember is that the multiplier only affects stones received from NPC monsters, not player characters!

Also if you leave Imperial City, getting killed by other players will NOT reduce the amount of Tel Var Stones you have. You can only gain and lose them within the walls of Imperial City’s Districts and Sewers.

Lastly, getting killing by NPCs in Imperial City will decrease your total stones by 10%. 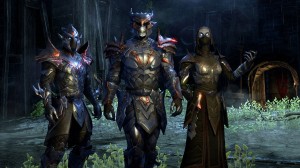 You have to be constantly vigilant in Imperial City to make sure you don’t lose your hard earned arcane currency. Having a higher multiplier is very enticing since you gain a hugely increased amount of Stones by slaying monsters, but it’s also very risky. If another player group comes by and decides to send you to the nearest wayshrine you will lose all stones, so weigh in the risk and reward carefully!

You can however permanently save your Tel Var stones by depositing them in your personal bank. Of course these stones will not count towards your multiplier, but they will be perfectly safe and there’s no way to lose them while deposited. Depositing in your bank will of course require you to visit your friendly neighborhood banker, none of which are found inside Imperial City.

Additionally a special Tel Var Stone Box in your inventory is available once you complete a certain quest in Imperial City (which is repeatable). These boxes allow you to store Tel Var currency inside them which also ensures you don’t lose it when killed. Like depositing in the bank, storing stones inside this box will also not count towards your multiplier!

The upside to storing Tel Var Stones in your inventory box is that you can open it any time. Just before you kill a boss and expect a sizable reward, you can take all Tel Var Stones from the box to get the multiplier.

It’s a good way to make sure you receive the multiplier bonuses while still keeping your Stones relatively safe. Just keep in mind that enemy players are no doubt also aware of this tactics, and will likely wait to strike just at the perfect moment. 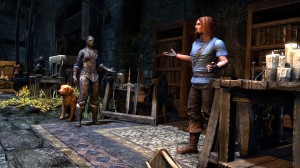 In your alliance’s home base in Imperial Sewers you can find merchants who will sell you all kinds of goodies in exchange for your Tel Var Stones. Currently there are six different items sets you can purchase: Black Rose, Meritorious Service, Phoenix Armor, Powerful Assault, Reactive Armor, and Shieldbreaker.

Additionally you can buy Tel Var Lockboxes and Greater Lockboxes that contain one random item from any of the sets mentioned above. You can’t choose the exact item slot you’ll get, but you can choose the set from which the item will be.

There are also general merchants which sell crafting profession materials for Veteran Ranks 15 and 16. That includes Charcoal of Remorse, ingredient required to craft items in the newly introduced Xivkyn racial style.

Lastly another newly introduced item is Sigil of Imperial Retreat, essentially a “heartstone” which can teleport you to your alliance’s home base from anywhere within Imperial City. It’s very expensive, has a channel time and is consumed upon use, so you’ll only use them in emergencies. Still it’s very handy to have one in your inventory at all times so you can quickly bring those Stones to safety.

In conclusion, Tel Var Stones really add a whole new dynamic to PvP in Elder Scrolls Online, and the risks are greater than ever. Going for that 4x multiplier is sometimes an irresistible bait, but it sure does get your blood pumping and makes PvP even more exciting!

Published 2731 days ago This entry was posted in Questions and Answers and tagged cyrodiil, Imperial City, PvP. Bookmark the permalink.